Summary: I complete and acquire several quests, unlock some more game features and pick up a few interesting tidbits.

While checking the map as I re-orientate myself after a few days away and the quest marker isn't in the lab but in that raised area outside of town. Naturally I will ignore this and go everywhere else (including the lab) first. It's one of the basic rules of RPGs after all. 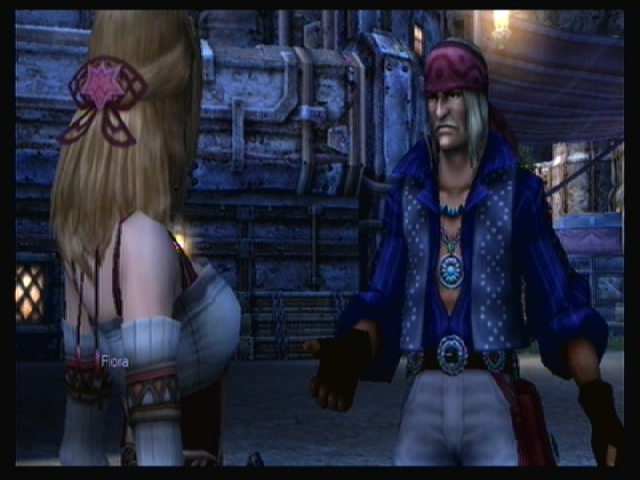 It's Dickson again. I couldn't resist including another image of him just to capture that great look he's sporting. He let's Fiora know he sent Shulk out for some fresh air and now it comes across much more that Dickson (and probably Dunban) were trying to set this up. I like that they care for these two, but why do they care so much? It feels like one big happy family.

Tutorial on Fiora's abilities! Seems she's actually the big hitter of the group, or at least, a glass cannon. Yet she's also got speed, so it's a good contrast to the slow, bulky Reyn. It's nice not to have the game default her to mage(/healer)/ranged duty, but nor has she sacrificed her femininity for it.

I find the people to deliver several of the key items I've been picking up around Colony 9. To my disappointment, the Wedding Ring isn't anything to do with Dunban, just a guy who misplaced his ring. I pick up a few new quests too, including the rest of the 'Monster Quest 1' line that I didn't realise I could get before. I'm really looking forward to getting some of the out-of-town quests done. 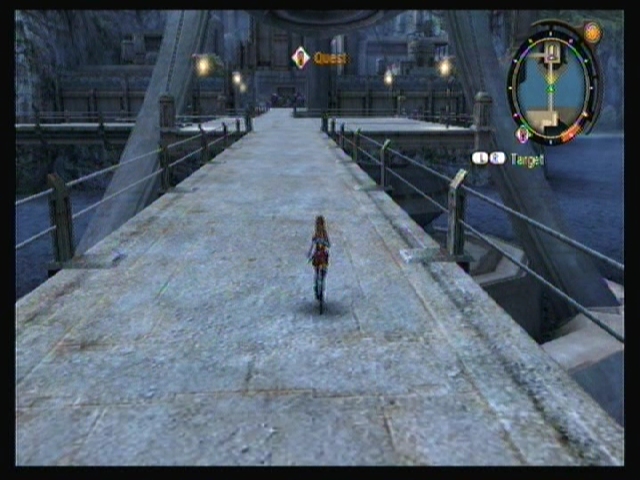 Even if I know the time doesn't really tick away, it feels like it takes too long to get from one place to another. But as is so often the case, it's not like Colony 9 is actually that big, in terms of its physical size and in it's ability to support a lot of people. I have to wonder if that's just something that couldn't be overcome in development (which I technically have no problem with), or if Colony 9 is supposed to appear small. Either way, a sprint or quick travel ability sure would be nice.

The lab now has an option to repair Désirée's watch, but I can't do it without Shulk. To get over that disappointment, and to try and complete 'Biscuits for a Grandson' I use the time change option. 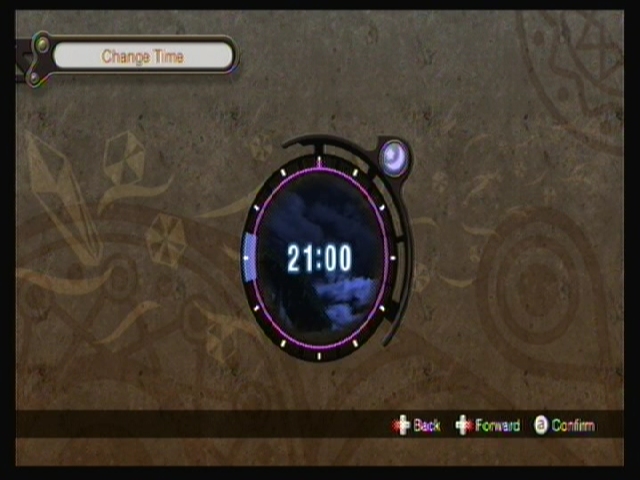 It really is as straightforward as promised. But now I have a different concern. If time can be changed so freely... why have a time dependant quest/enemy system at all? It must be less frustrating than waiting 20 minutes for the right time of day to find/complete a quest, and this game certainly seems to be very user friendly, but it's created a new problem. It's frustrating that I have to micromanage the time to find/complete quests, given that time doesn't otherwise seem to matter. At all.

And it's not just that I got annoyed that after eventually finding Marcia's grandson, Jiroque, I have to return to her (some time in the day) to complete the quest. Absolutely not. The few enemies I find on the steps are weak, so it's difficult to gauge Fiora's relative power in a few battles. 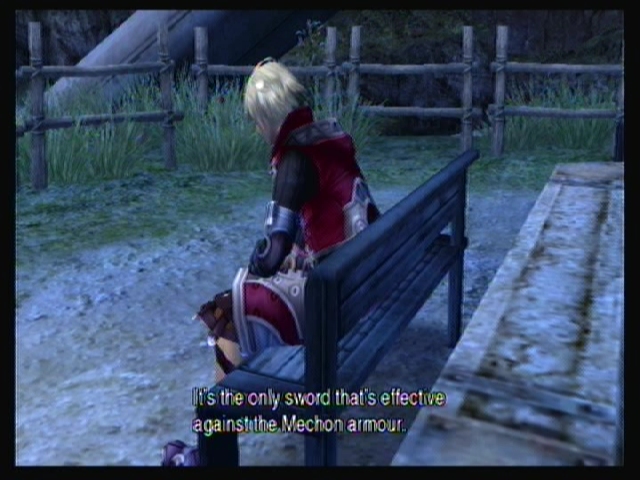 Fiora comes across Shulk in the Outlook Park but it seems his mind is still on his work. At least I now know why they think this is a weapon for killing Mechon. I won't jump the gun and conclude that this means it's the only weapon (not sword, specifically weapon) that can damage Mechon armour, else wise Colonies 6 & 9 sent a lot of people to their deaths a year ago with little-to-no ability to defend themselves.

Shulk: "They say that before time began, it was wielded by the Bionis."

I'd noticed that the glowing weapon one of the titans had was broadly similar to the Monado, but the same weapon? How did it reconfigure its size so dramatically? I know this is only legend, not fact, but that line isn't often invoked in video games, so I'll tentatively treat that as true for now. Shulk continues his fascination with unlocking the Monado's true power and I have to ask: for what end? The destruction of ALL Mechon? Is that something he could want or live with? Or just the power to protect (which would lead to its own issues)?

Shulk praises Fiora's food as "amazing", just as she (and Dunban) expected. Or not, as "amazing" is Shulk's upgrade from "delicious", and it's accurate, given that Fiora put even more effort in today. No idea why, or why we're being shown this, nice as it is. It seems to suggest Shulk does care/notice things around him outside his work, but everything else suggests he doesn't. Just as they started commenting on how they enjoyed these rare moments of peace, and I began to note that down as a bad sign, the Debris Siren goes off, and several Anti-Air batteries take out anything falling towards the Colony. It hasn't happened for a while though. Not just a throw-away line? As we prepare to head back to the Colony, I get the option to change my party leader but leave Fiora in for now. I also get some more tutorials on game features: Party Affinity and Heart to Hearts.

Affinity seems to work mostly like townspeople affinity, except I build it up by pressing B just before and at times during battle. Will have to see it in practice before I can tell how I feel about it. Building enough affinity allows me to participate in Heart to Hearts, which seems similar to Star Ocean's Private Actions. I even get to choose dialogue options! I decide to play it safe on my first answer and get it 'wrong', though Fiora doesn't seem to mind. I'll do these as I think the character would respond, so definitely not saying the marriage option for 2. They mention that Fiora ran away from home, and Dunban was angry. Does Fiora live with Dunban? I guess it would explain their closeness.

Not sure where to go now but the map indicates it's back to the lab.

Just past the Residential entrance I come across another heart to heart but I don't meet the pre-requisites to view it just yet. I pick-up a final few quests before calling it on this session.

Next time: Quests, quests and more quests.
Posted by FatePlaysGames at 18:59